CANNING consists in sealing foods in receptacles, such as cans or jars, in such a way that they will remain sterile for an indefinite period of time. Several methods of canning are in use, and the one to adopt will depend considerably on personal preference and the money that can be expended for the equipment.

In any case, successful results in canning depend on the care that is given to every detail that enters into the work. This means, then, that from the selection of the food to be canned to the final operation in canning not one thing that has to do with good results should be overlooked.

SELECTION OF FOOD FOR CANNING

A careful selection of the food that is to be canned is of great importance. If it is in good condition at the time of canning, it is much more likely to remain good when canned than food that is not.

The flavor of the finished product also depends a great deal on the condition of the food. Fruits have the best flavor when they are ripe, but they are in the best condition for canning just before they have completely ripened. Immediately following perfect ripeness comes the spoiling stage, and if fruits, as well as vegetables, are canned before they are completely ripe, they are, of course, farther from the conditions that tend to spoil them.

This, however, does not mean that green fruits or vegetables should be canned. Whenever possible, any food that is to be canned should be perfectly fresh. The sooner it is canned after it has been gathered, the more satisfactory will be the results.

Unless this is done, they will develop a bad flavor because of flat sour, a condition that results from the action of certain bacteria. Imperfect fruits should not be canned, but should be used for making jam, marmalade, or jelly. 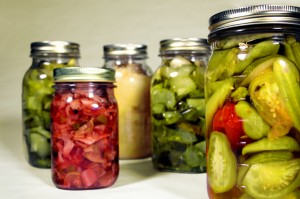 Canned foods spoil because of the action of micro-organisms that cause fermentation, putrefaction, and molding. However, when canning does not prove effective, it is because undesirable bacteria are present in the food.

Either they have not been destroyed by the canning process or they have been allowed to enter before the jar was closed, and have then developed to such an extent as to cause the food to spoil. Odors, flavors, and gases result from the putrefaction, fermentation, or molding caused by these bacteria, and these make the foods offensive or harmful, or perhaps both.

From what has just been said, it will be seen that the success of canning depends entirely on destroying harmful micro-organisms that are present in the food and preventing those present in the air from entering the jars in which the food is placed.

Some foods are more difficult to keep than others, because bacteria act on them more readily and the foods themselves contain nothing that prevents their growth. Among such foods are meat, fish, peas, corn, beans, and meat soups.

On the other hand, some foods contain acids that prevent the growth of bacteria, and these keep easily. Among these are rhubarb, cranberries, and green gooseberries. However, foods that keep easily are few, and in most cases extreme care in the process of canning must be exercised.

While warmth is necessary for bacterial growth, very high temperatures will destroy or retard it. In canning, a temperature as high as 212 degrees Fahrenheit, or boiling point, retards the growth of active bacteria, but retarding their growth is not sufficient. They must be rendered inactive.

To do this requires either a higher temperature than boiling point or long continued cooking at 212 degrees. Spores are a protective form that many kinds of bacteria assume under unfavorable conditions. They are very difficult to kill, and unless they are completely destroyed in the canning process, they will develop into active bacteria when conditions again become favorable. The result of the spore development is the spoiling of the food.

Other things besides the application of heat assist in the keeping of canned food, as, for example, the acids of the fruits and vegetables themselves, as has been mentioned. The use of sugar also assists; the greater the quantity of sugar in solution the easier it will be to keep the food.

This is proved in the case of jams and jellies, which will keep without being sealed tight or put into jars immediately after cooking. Salt helps to keep vegetables that are canned, and, in making butters, conserves, and pickles, the spices and vinegars used help to protect the foods from bacterial action.

However, none of these things are essential to the keeping of any sterile food, by which is meant food in which all bacteria or sources of bacteria have been rendered inactive by the application of sufficient heat. 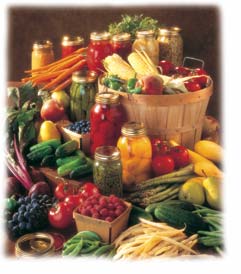 Numerous compounds, usually in the form of powders, are advertised as being useful for keeping canned foods from spoiling. None of them should be used, however, because they are unnecessary.

If the work of canning is carefully and effectively done, good foods will keep perfectly without the addition of a preservative. The pure-food laws of the United States and of many of the states themselves forbid the use of some preservatives because of their harmful effect on the human system.

For this reason, to say nothing of the extra expense that would be incurred in their use, such preservatives may well be left alone.

This site uses Akismet to reduce spam. Learn how your comment data is processed.